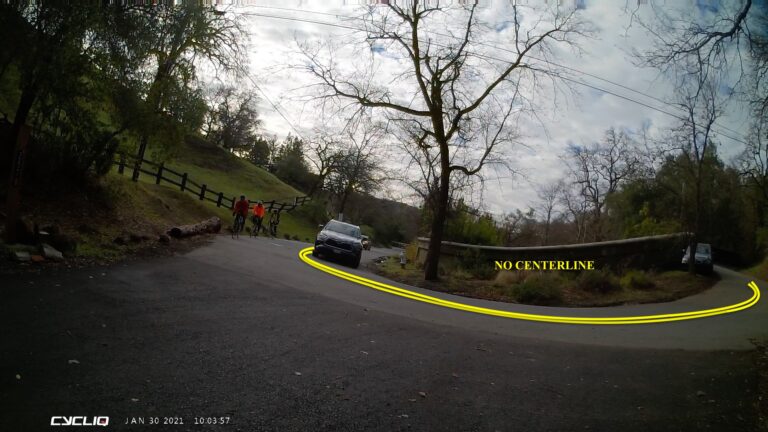 Without action, another motorist will hit a bicyclist or pedestrian, causing serious injuries or another fatality
By ALAN KALIN and NICOLA PLACE I PUBLISHED: April 7. 2021 at 5:00 a.m. I

UPDATED: April 7. 2021 at 5:24 am. We consider ourselves extraordinarily fortunate to live near Mount Diablo State Park. Unfortunately, the primary access to this increasingly popular park is a small, narrow, old road that is deadly dangerous.

Going north, The Danger Zone starts with a blind crest over a hill and then dives into two blind turns, followed by a narrow and shaded section that impairs drivers' ability to see oncoming traffic. Two more blind turns proceed steeply uphill (8%-10% grades). before a final blind turn at the park boundary.
Incidents in "The Danger Zone," a deadly stretch of Mount Diablo Scenic Boulevard leading to Mount Diablo State Park. (Courtesy of Alan Kalin)

The road, with no center line, is barely wide enough to allow pedestrians and vehicles to pass each other, much less emergency vehicles. Park visitors routinely drive in an unlawful and frighteningly dangerous manner — with no legal consequence.

Mount Diablo State Park rangers and the Contra Costa County sheriff deputies do not monitor the road. The California Highway Patrol responds only when there has been a road blockage or a fatality.

On a typical weekend day, over 800 vehicles travel along Mount Diablo Scenic Boulevard with approximately 1,000 bicyclists and hundreds of hikers and joggers also on the road. Visitors accessing the park's Summit Trailhead park illegally in The Danger Zone, further narrowing the road and restricting visibility.
The road through The Danger Zone was created as a toll road in 1920 for horses and Model Ts, not for modern-sized vehicles. Due to the terrain and the era, the road is 16 feet wide, below contemporary Caltrans standards for two-way traffic (normally 24 feet).

When California State Parks in 1931 was granted an easement for visitors to pass over (not park on) this small road, it took on legal responsibility for the roadway. That responsibility was confirmed by a judge's order in 1991 instructing the state to take action to be a responsible easement holder.

Mayaan Jones However, the state has not done so. Neither has the state created adequate parking within the park boundaries for visitors. Overflow vehicles (hundreds on busy weekends) end up parking in The Danger Zone and at Athenian School.

Now. 90 years after the state was granted the easement, the pandemic-related increase in travelers through The Danger Zone further demonstrates why it's imperative that the state step up. California State Parks must take timely action to make this portion of Mount Diablo Scenic safer for visitors and all road users.

To witness the danger for yourself, watch the The Danger Zone videos at bikedanville.orq. You'll see park visitors' vehicles passing bicyclists and hikers on blind curves and in the deeply shaded narrows, the location where on June 26, 2019. Maayan Jones. husband and father to three young boys. was killed.

Mount Diablo State Park is a premier destination for Bay Area residents. Drivers traveling through The Danger Zone often ignore the rules of the road and are oblivious to its dangers. If the state fails to act, it's not a question of if, but when. another motorist will hit a bicyclist or pedestrian, resulting in serious injuries or another fatality.
Alan Kalin is chairman of Bike Danville and president Mount Diablo Cyclists. Nicola Place lives on Mount Diablo Scenic Boulevard.