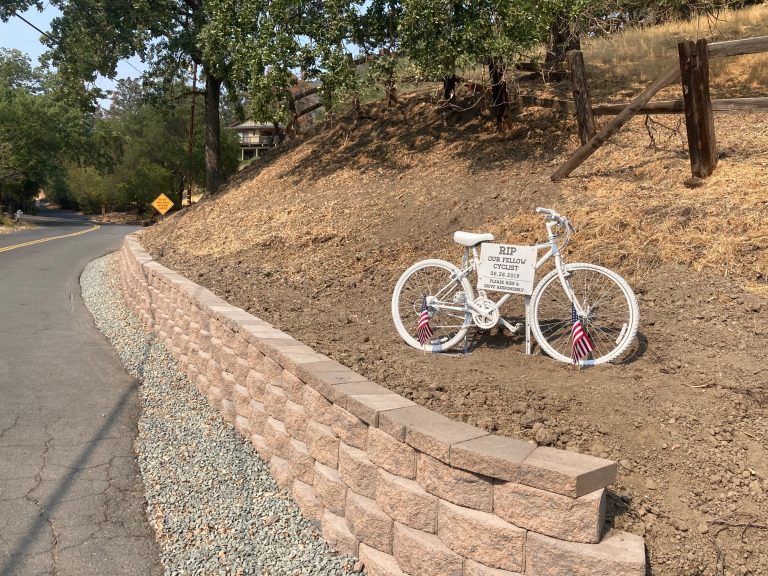 Since the death of Maayan Jones (photo above) in 2019, the residents in the "Danger Zone" have attempted to engage Eddie Guaracha, Diablo Range District Superintendent, California State Parks; to improve the safety for All Park Visitors along this section of road. Please take a few minutes to become acquainted with the History of "Stall & Delay" below: 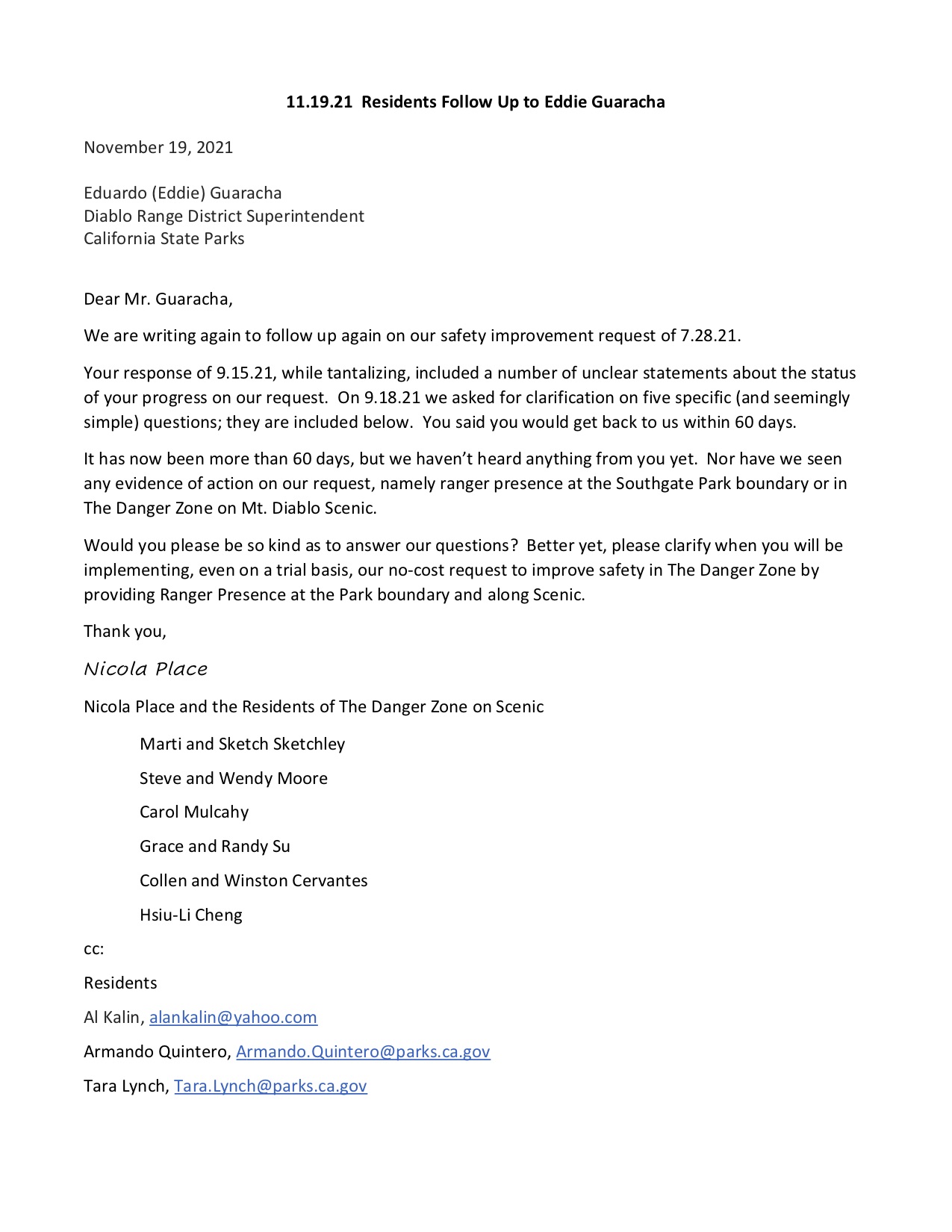 As you may or may not be aware, Mt. Diablo Scenic Boulevard is a private road, and each property owner owns a portion of the road.  As such, the owners and any easement holders are jointly responsible for its maintenance (CA state civil code section 845).

Mt. Diablo State Park is an easement holder and is therefore responsible for its share of maintenance.  Though the Park is the majority user of the road, State Parks has not been willing to do their legally obligated part. In fact, they've spent 50+ years avoiding a resolution.

As annoying as that sounds, this email and the attached letter require no action; it is purely to update you as to the long-term and most recent efforts to engage State Parks in sorting out the Mt. Diablo Scenic maintenance conundrum.

Given State Parks' track record, coupled with the exceptional legal and financial complexity of the situation, I do not expect any resolution but just wanted you to be aware of the background.

(Sent via e-mail to all property owners on Scenic except to the owner of 2478; his contact information is unknown.)

But is this such an effort?  To answer that, I think it's important to review the historical record:

I have no idea why you failed to do these things; it suggests an astonishing level of disorganization or intentional inattention to details (“Stall and Delay”).  But in any case, it's behavior inconsistent with the productivity and reliability that would be required to carry a project of this magnitude and complexity forward.

In summary, neither you, as California State Parks’ representative, nor your superiors in the Parks system have ever initiated an effort to address the road maintenance needs of Scenic.  Further, both past and current responses by State Parks (to residents’-initiated requests for engagement) have lacked the capacity, the skills, the interest, the commitment, and the backing to even initiate a project of this complexity, much less complete it. (Refer to BikeDanville.org for over 50 years of primary documents/videos).  What State Parks has demonstrated is a perfect track record of no actual progress on road maintenance.

Unfortunately, this appears to be another round of "Stall and Delay" by State Parks, which is not a project I want to be part of, especially since it is likely to be coupled with the “Blame it on the Residents” outcome report.

All of which leads me back to my original question:

Since there's no evidence that there's a good-faith, qualified, legitimate effort underway, what, exactly, are you and California State Parks seeking to accomplish?

Or, if that’s a question you’d prefer to avoid,

What dates are you offering to host a meeting to which you invite EVERY owner on Mt. Diablo Scenic as evidence that this is, in fact, a good faith effort?

I look forward to your reply. 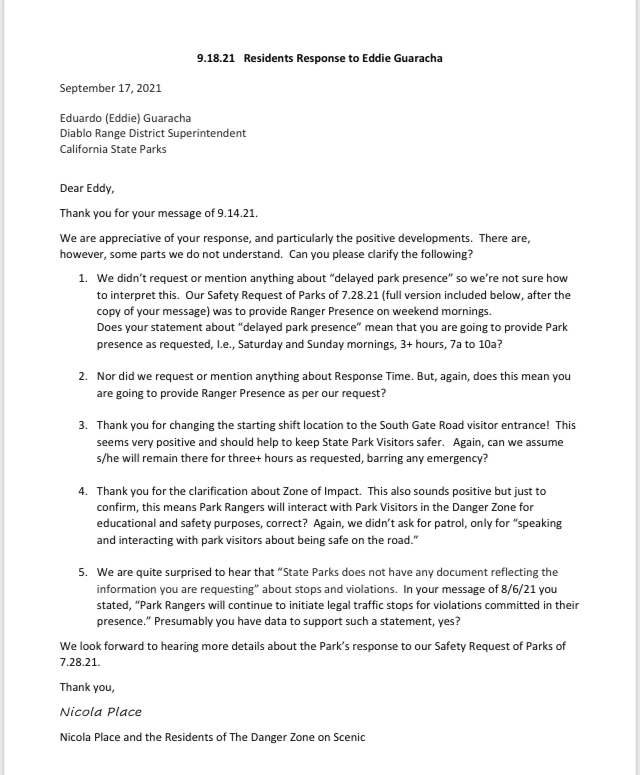 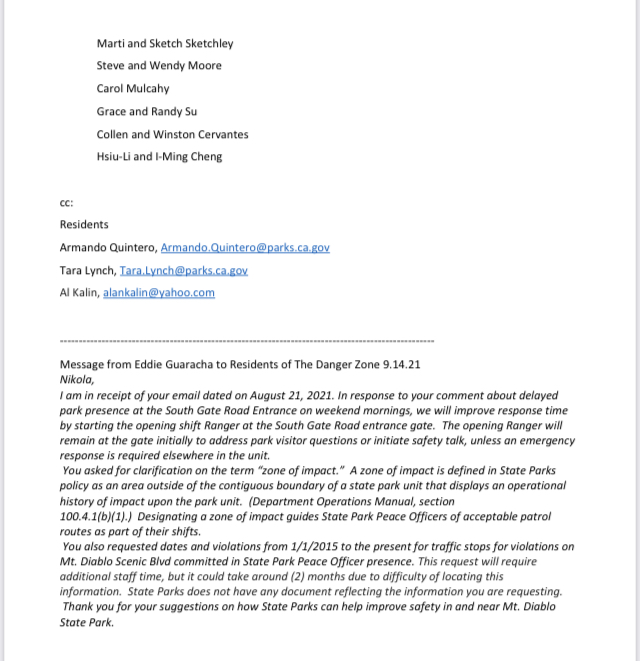 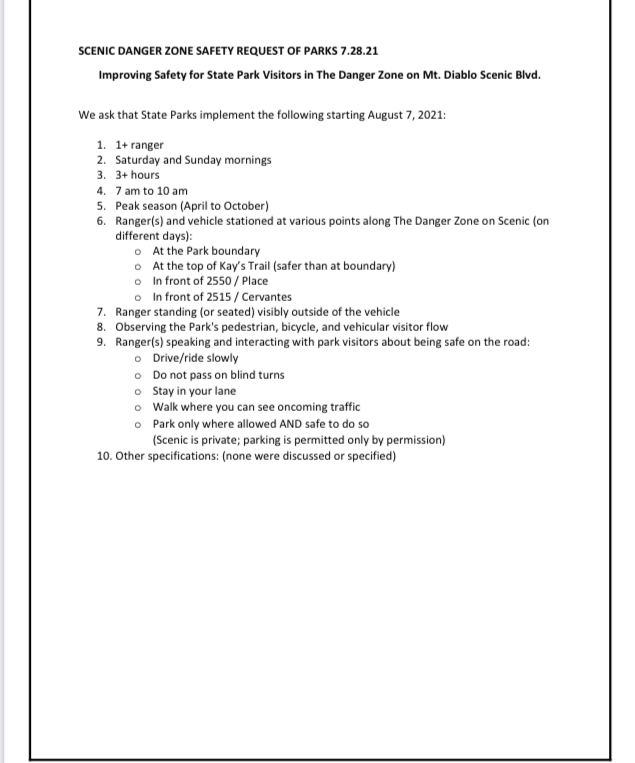 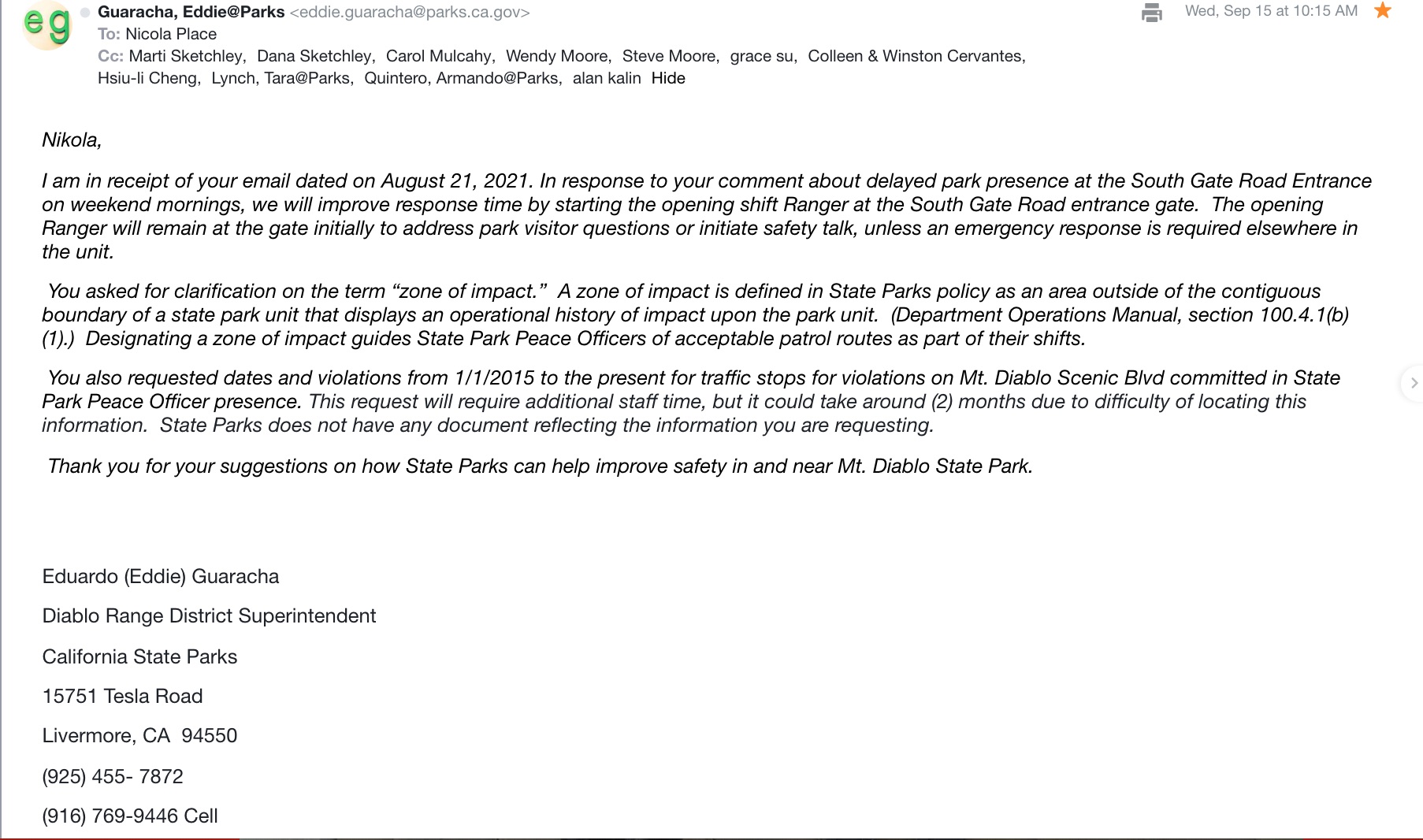 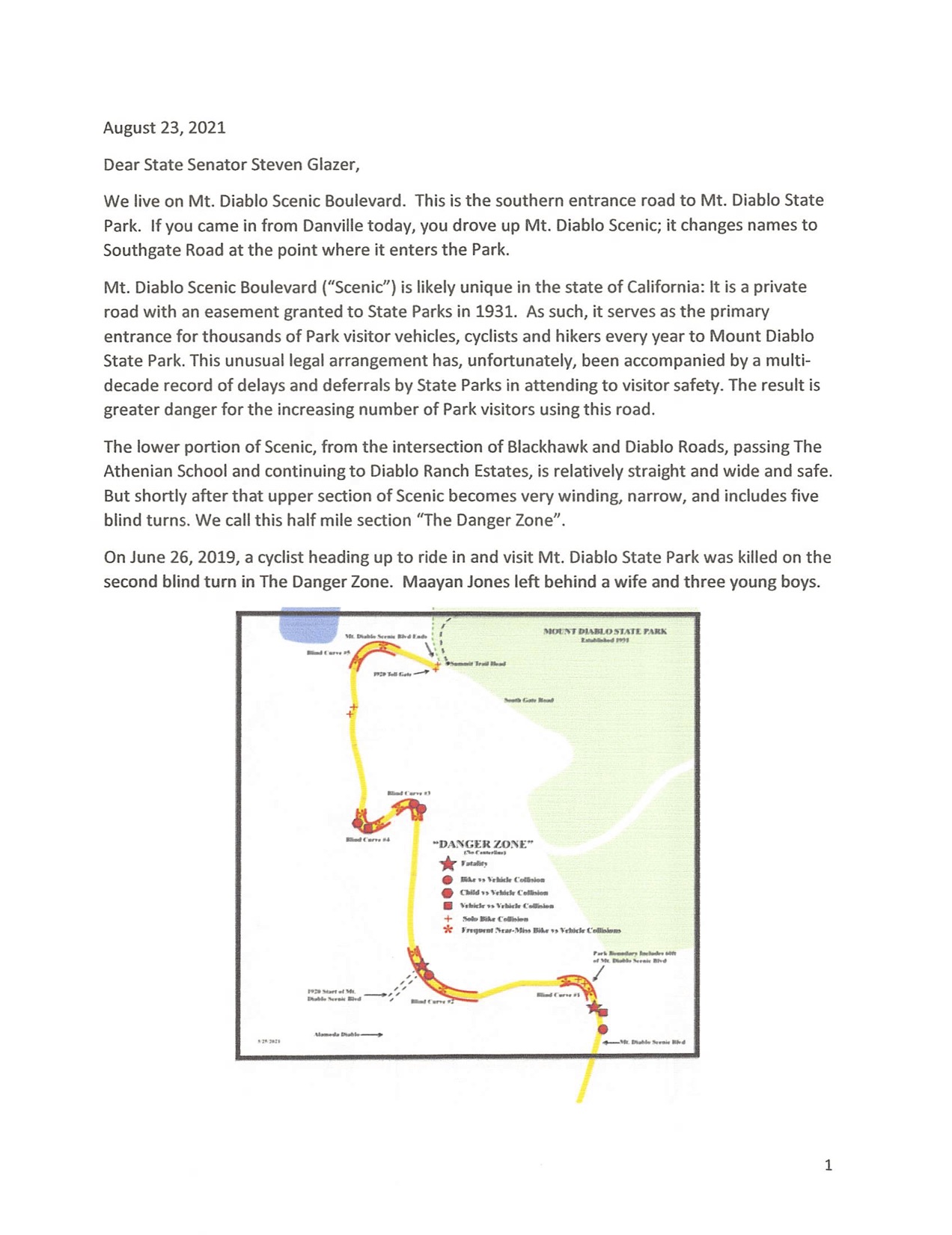 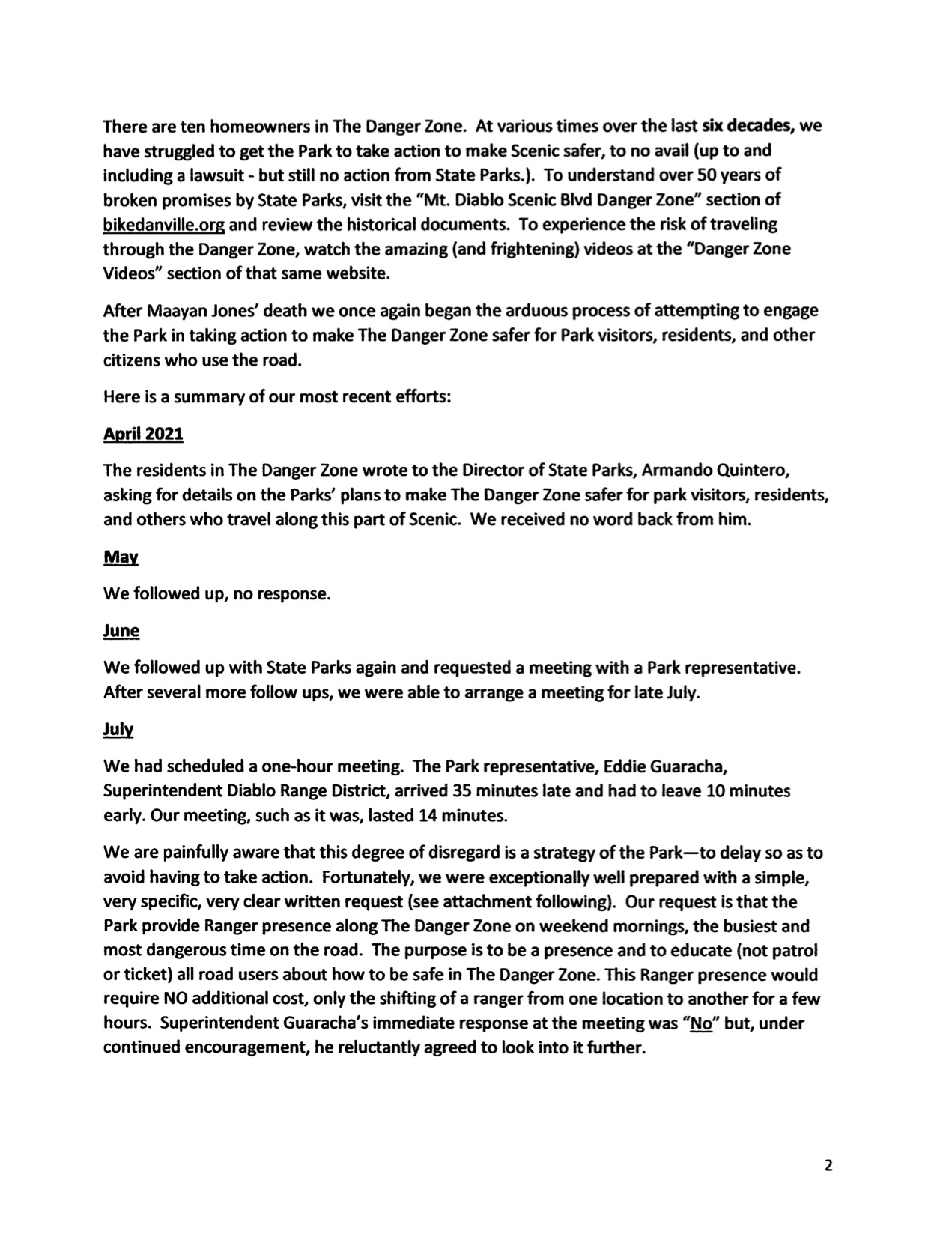 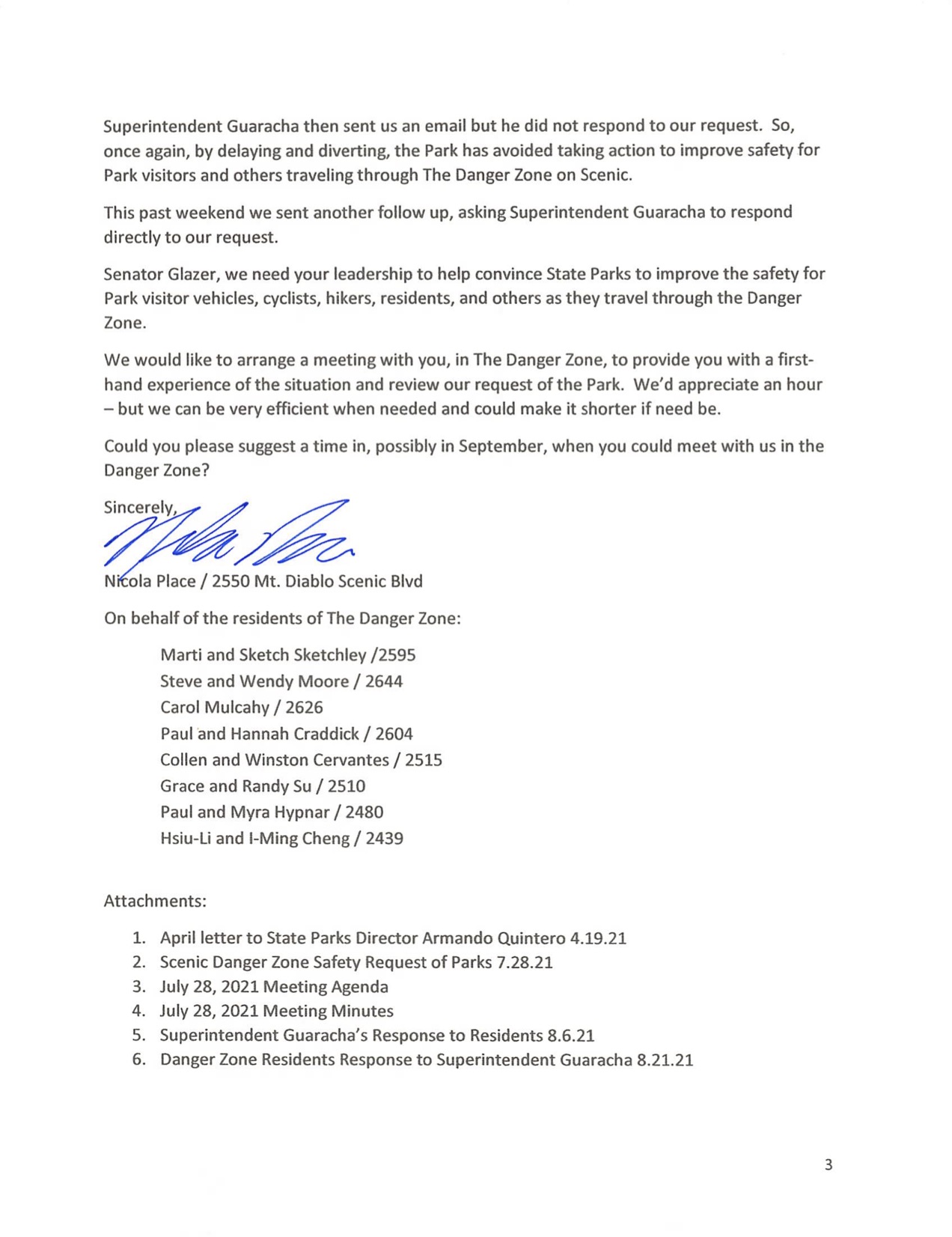 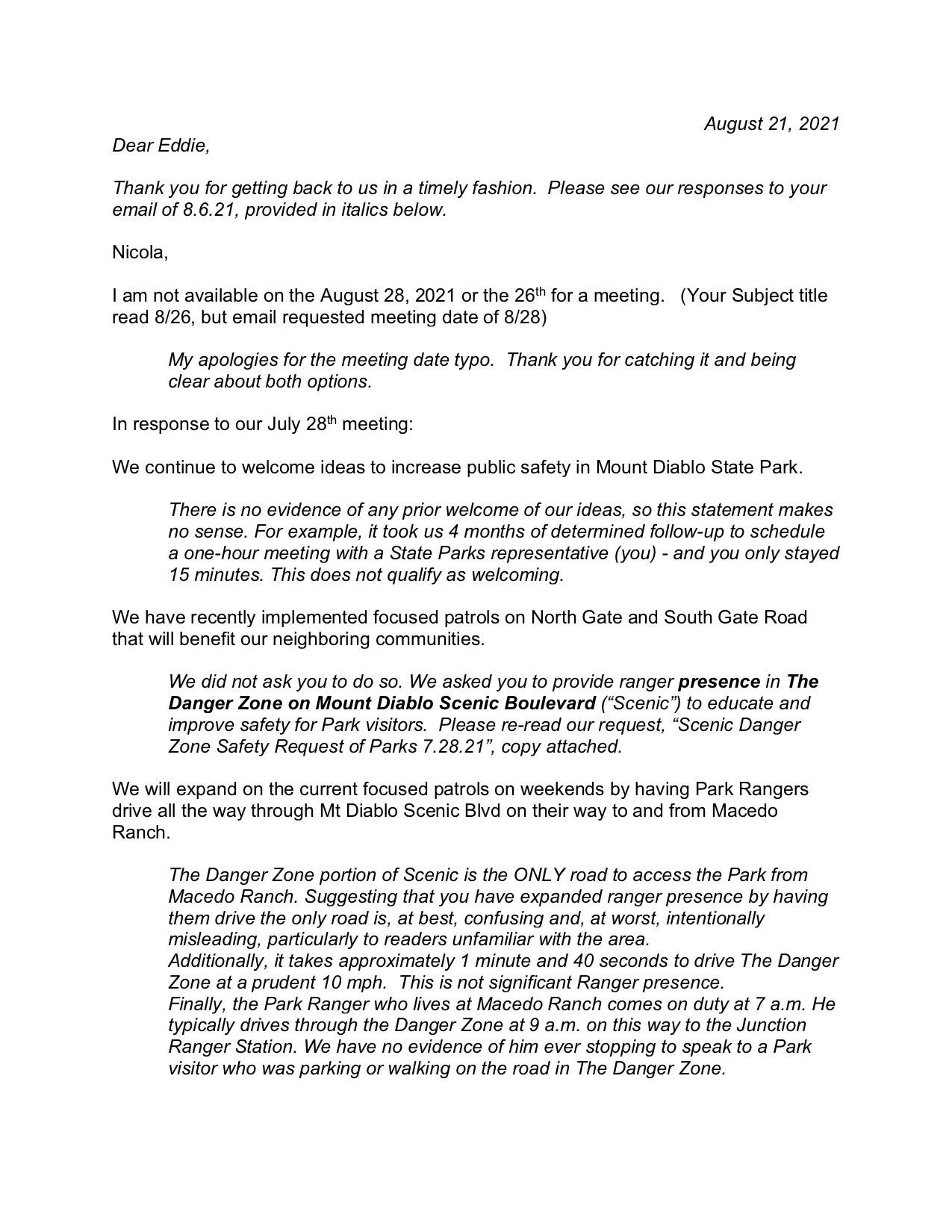 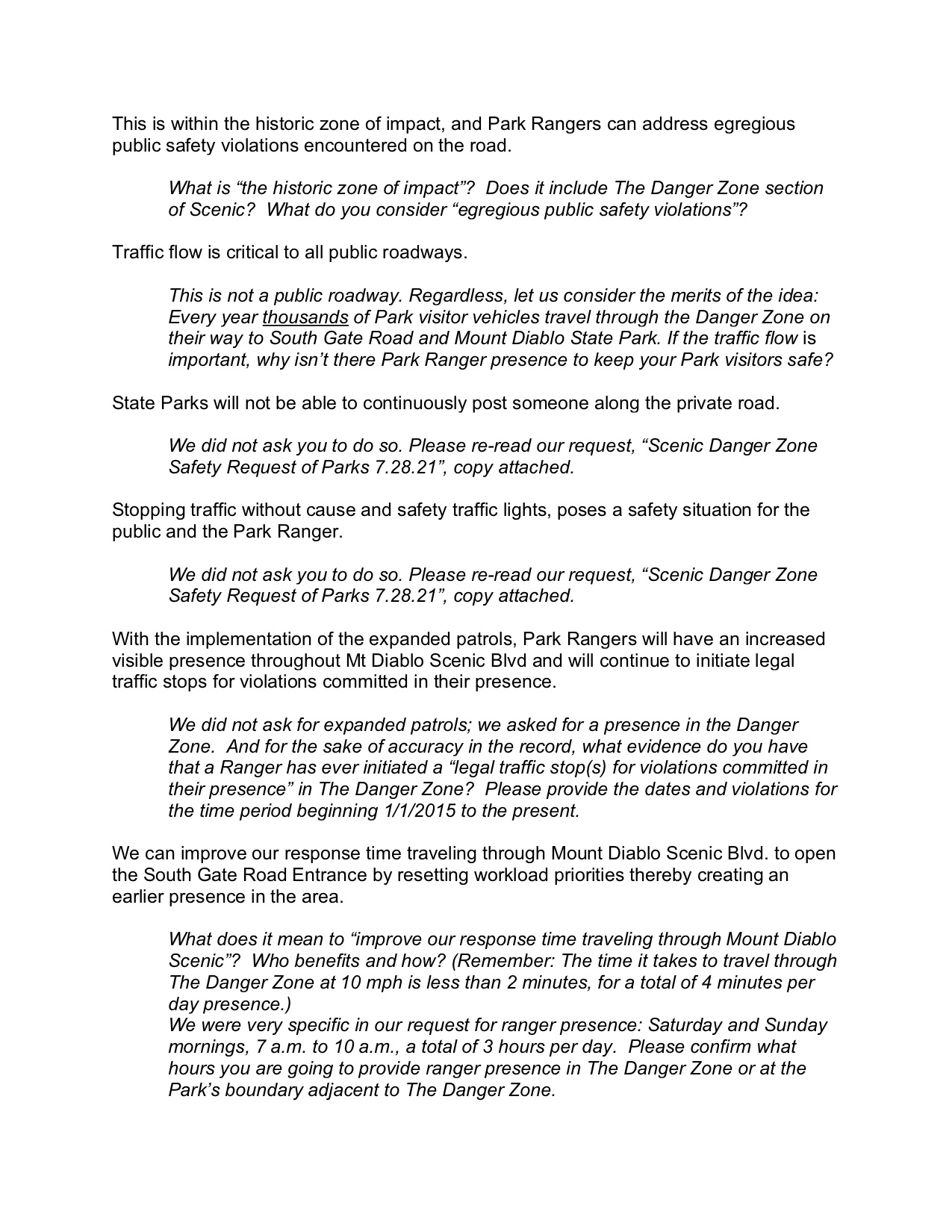 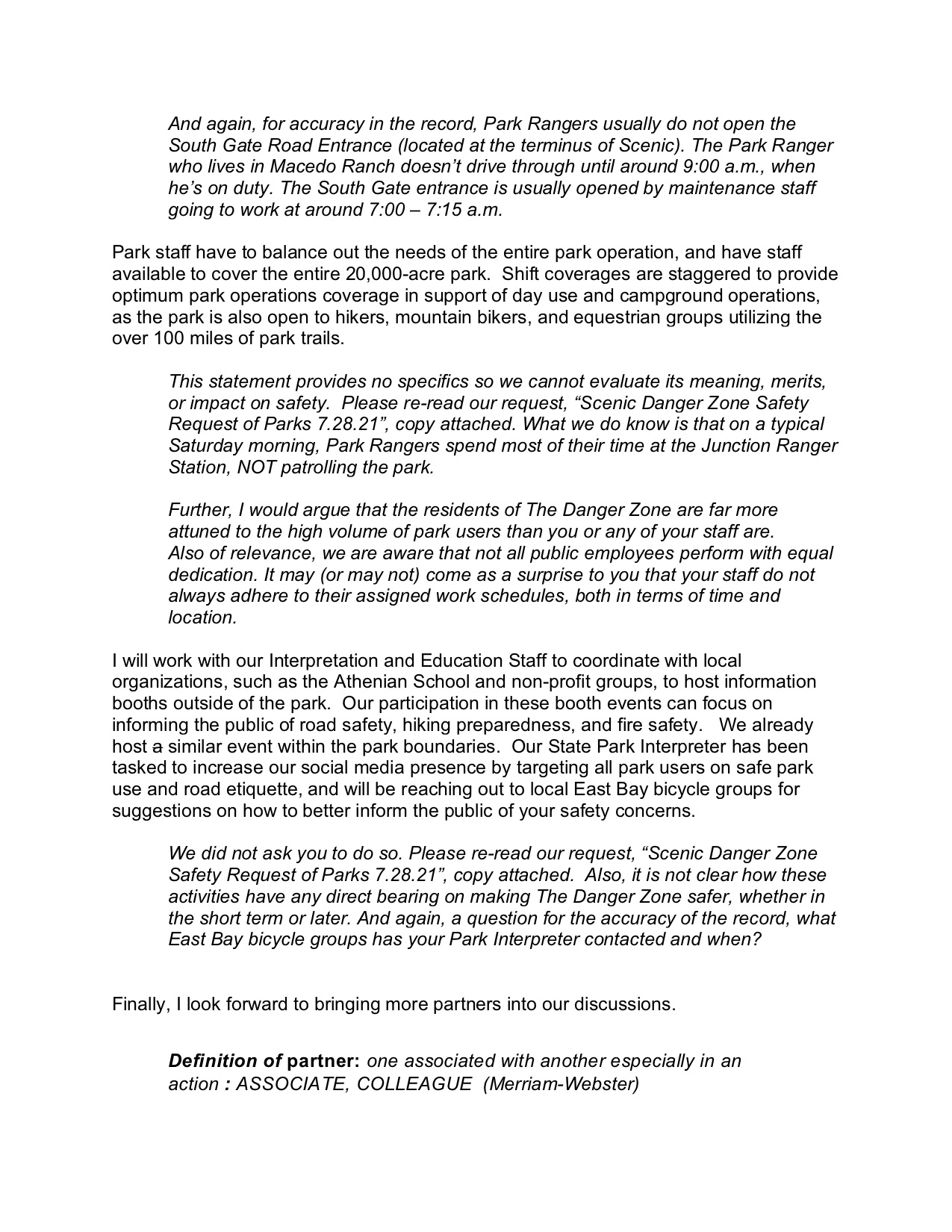 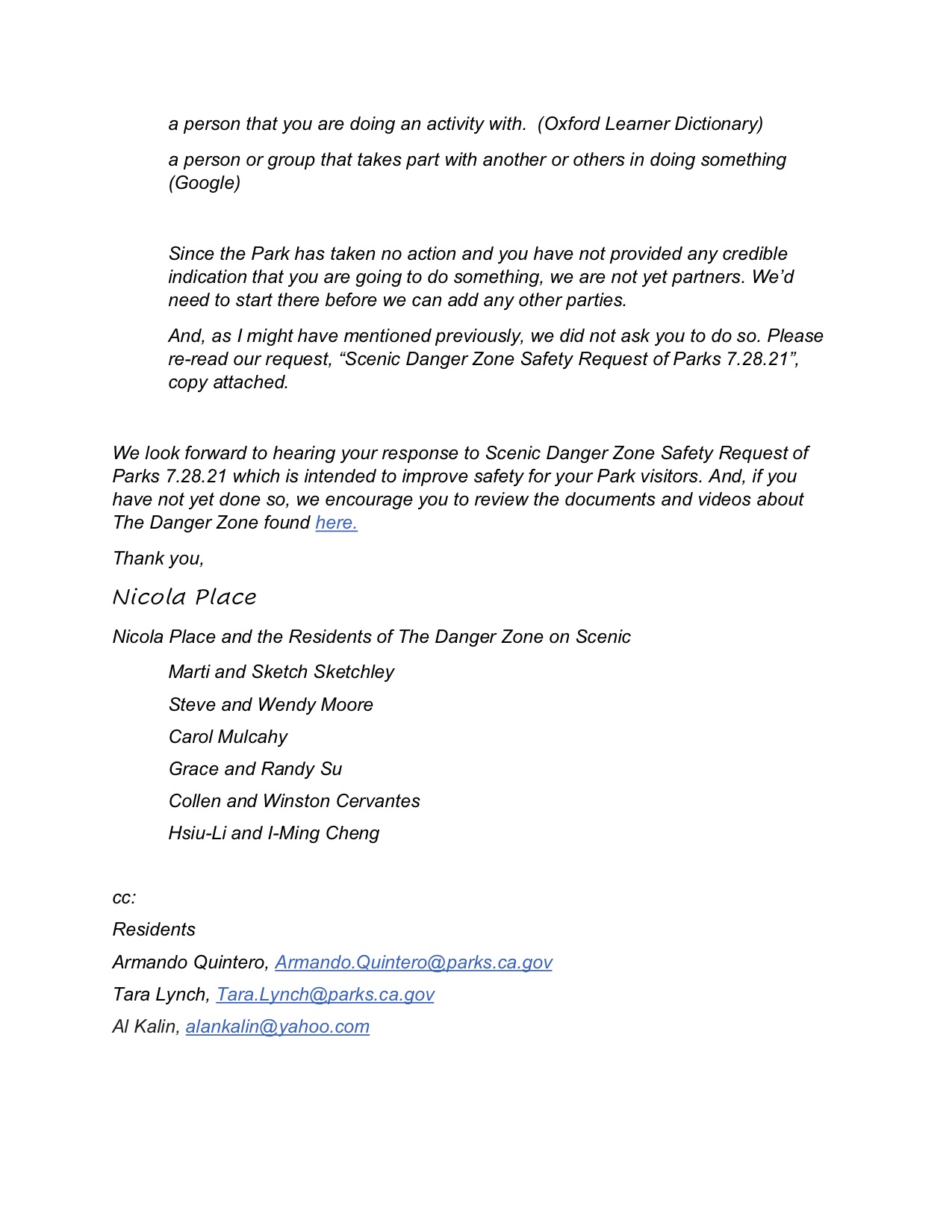 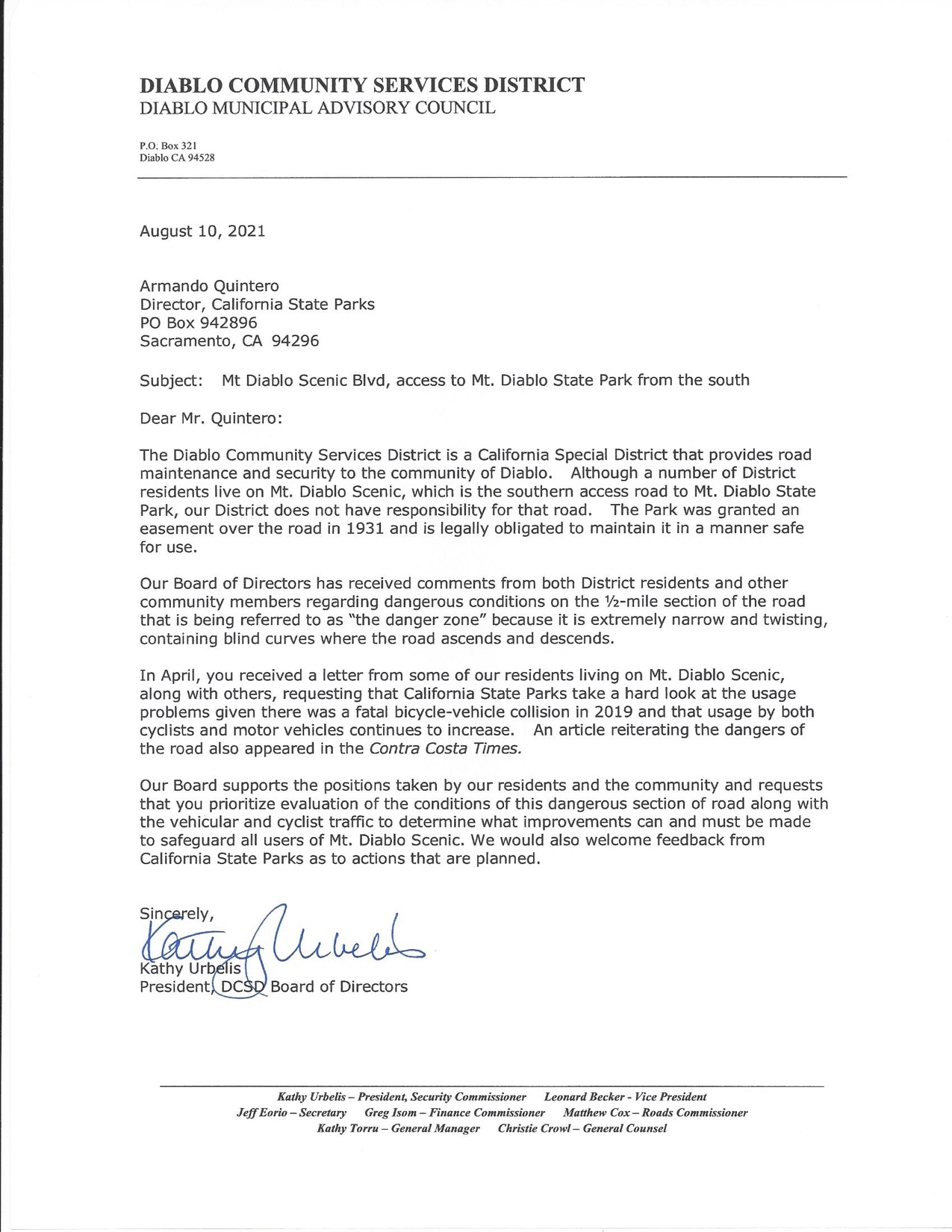 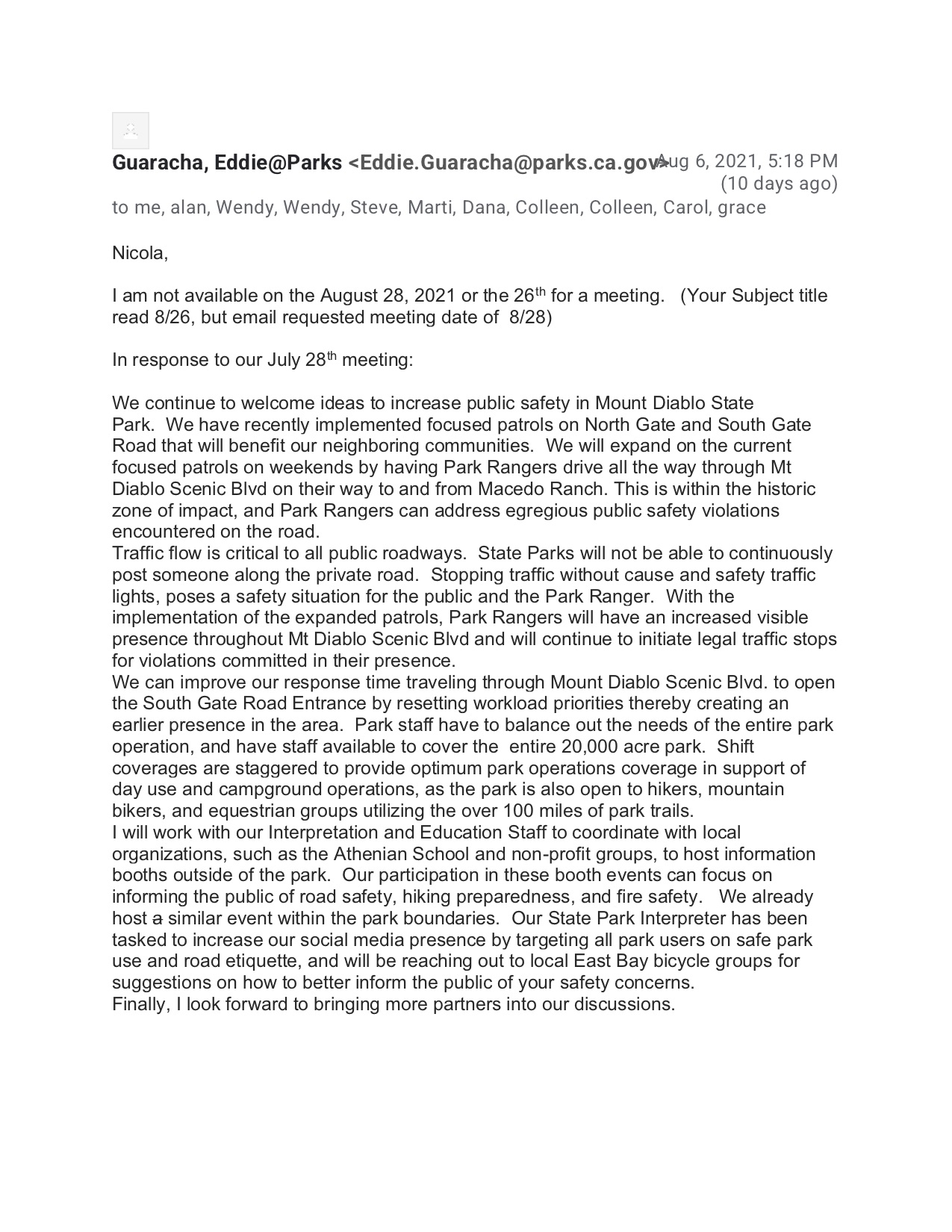 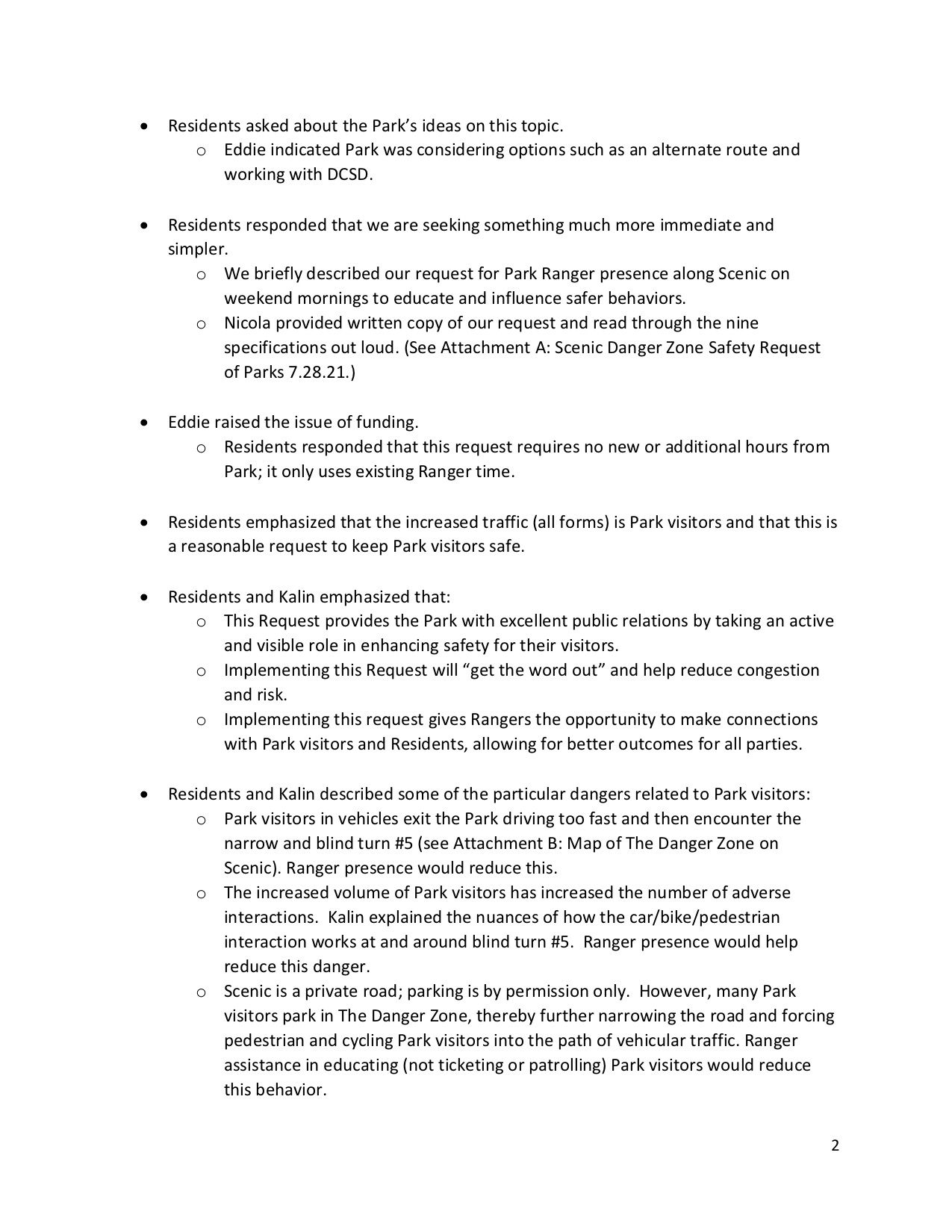 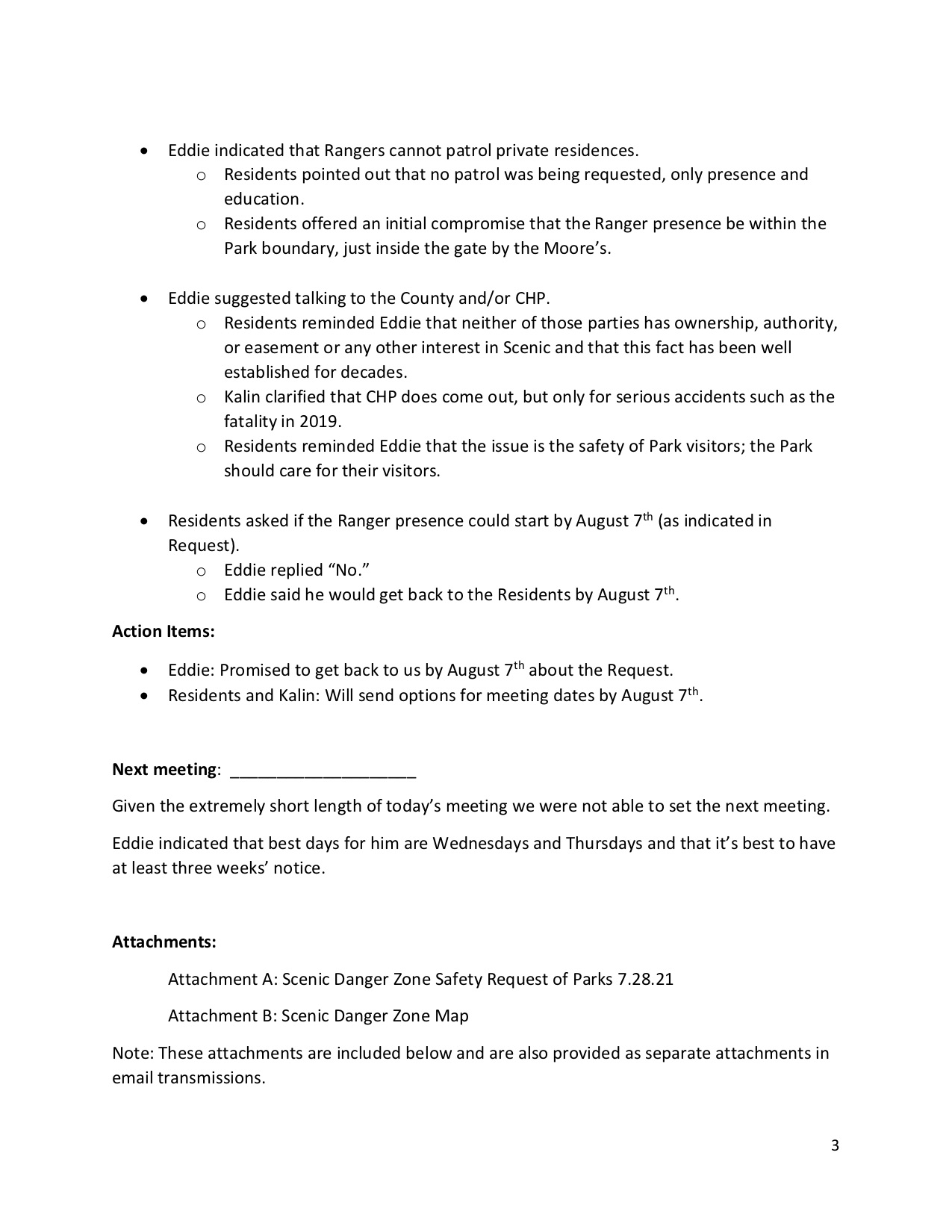 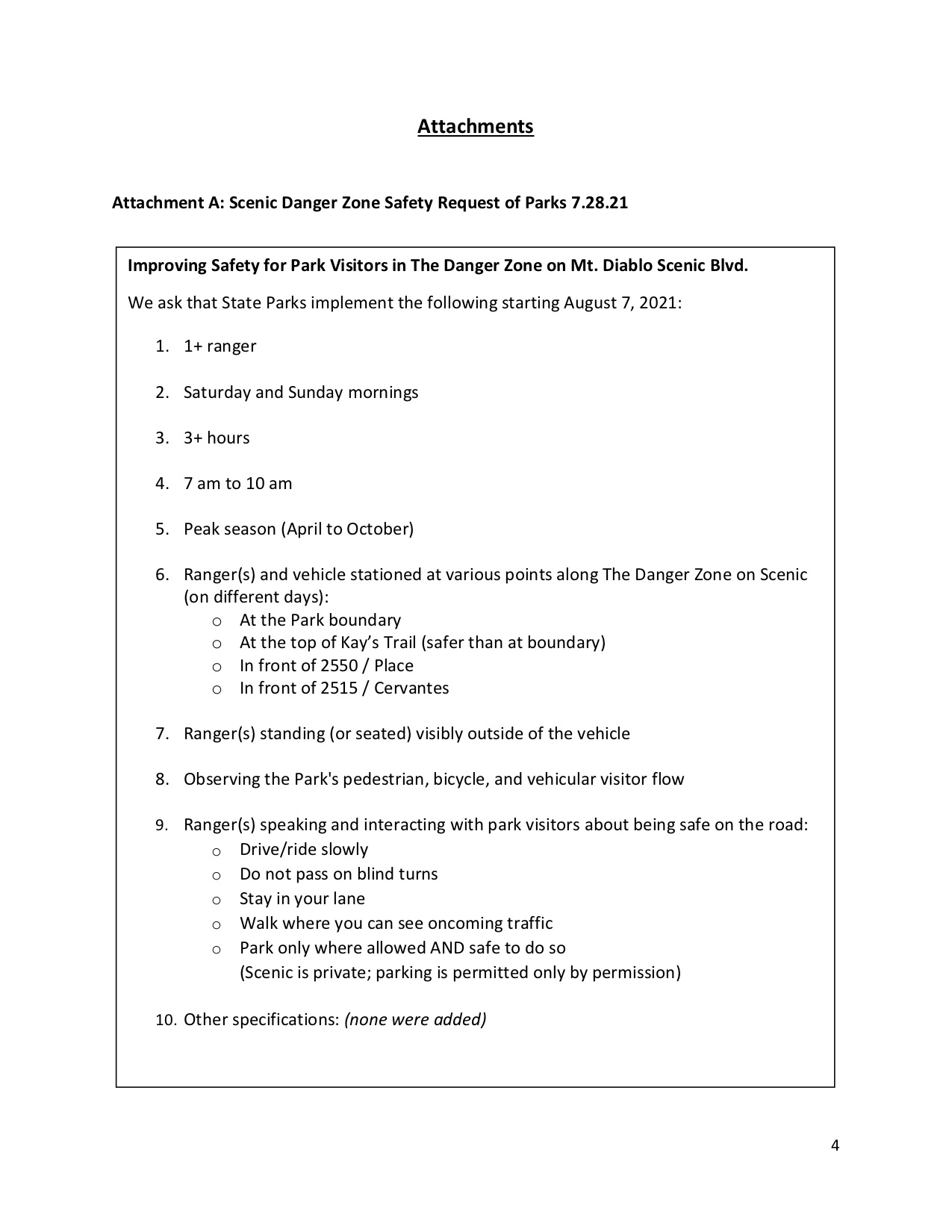 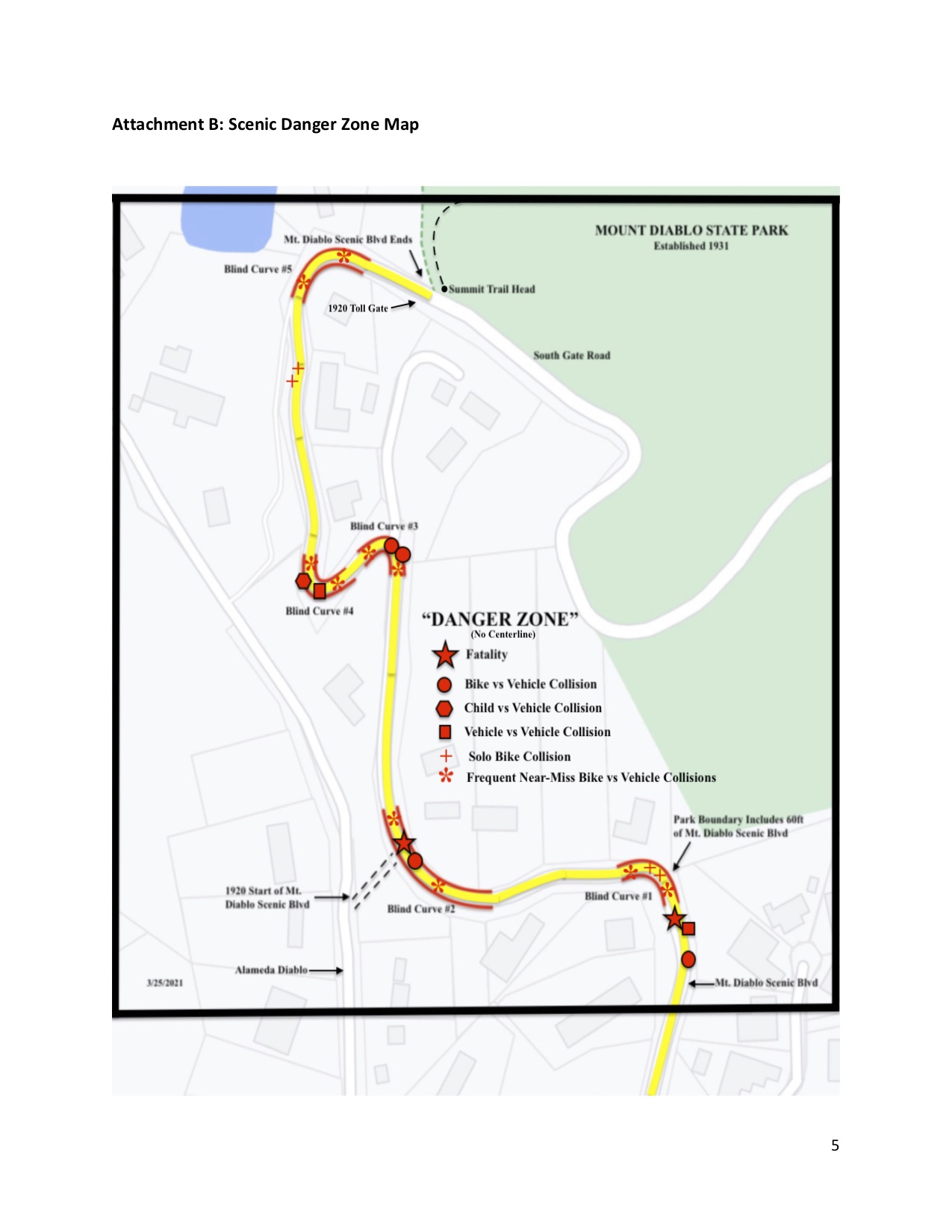 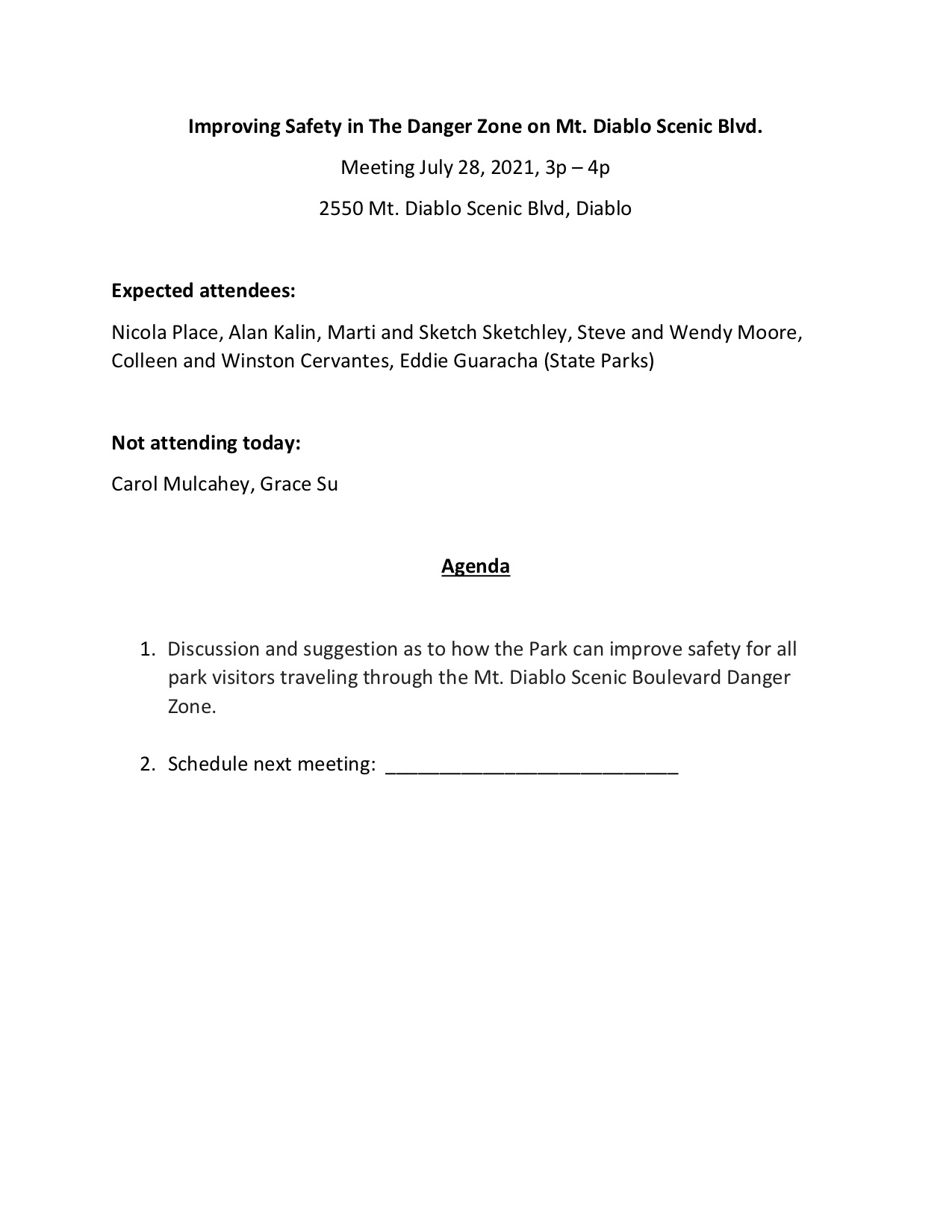 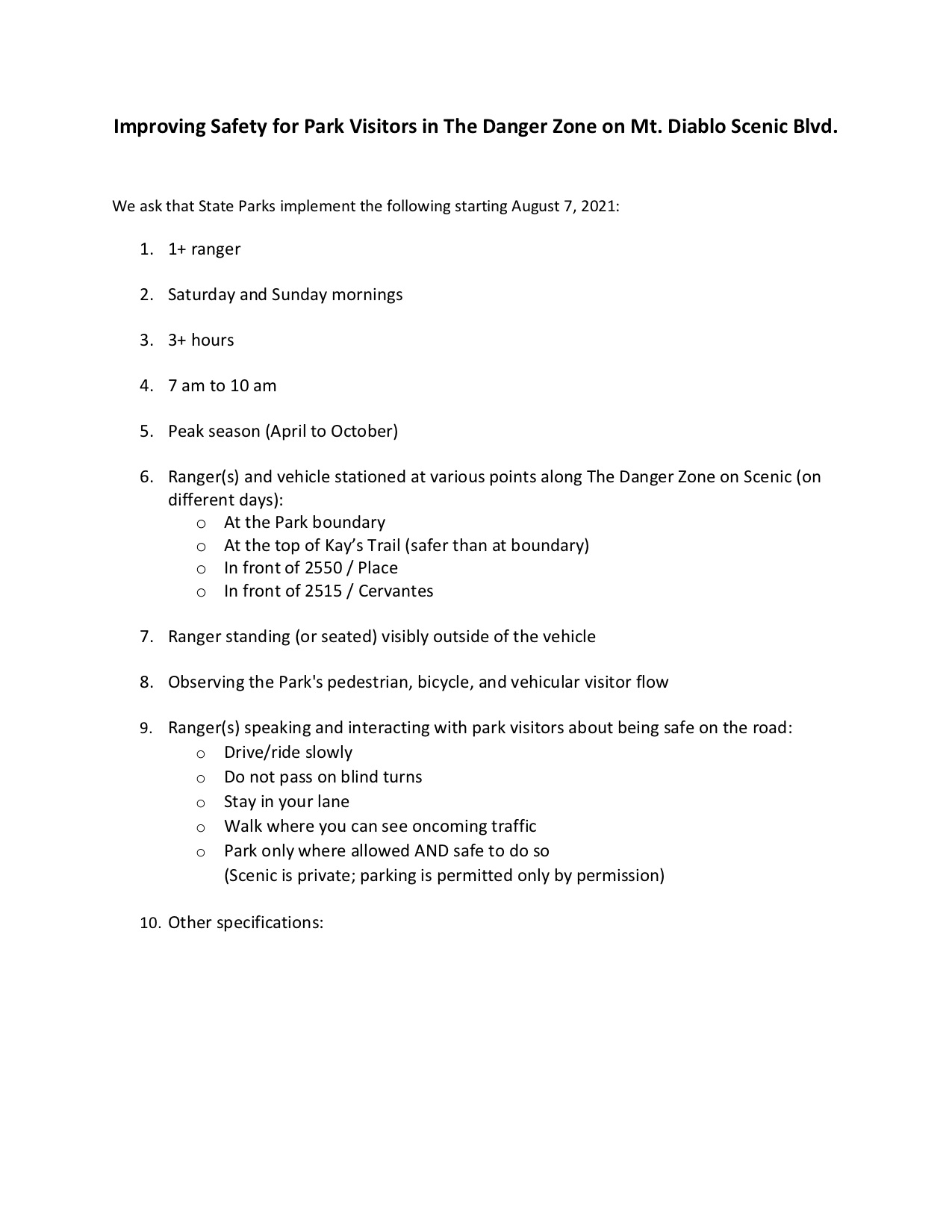 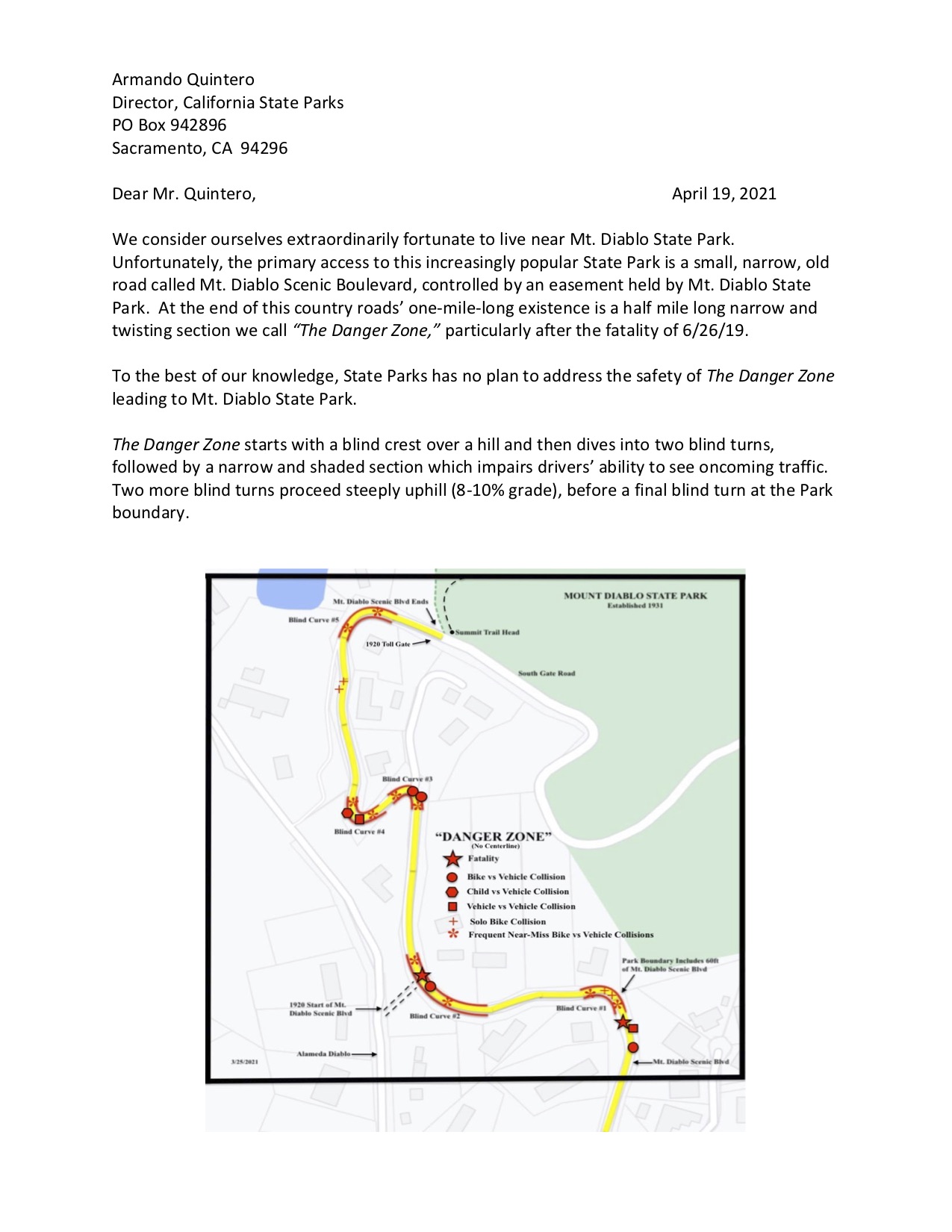 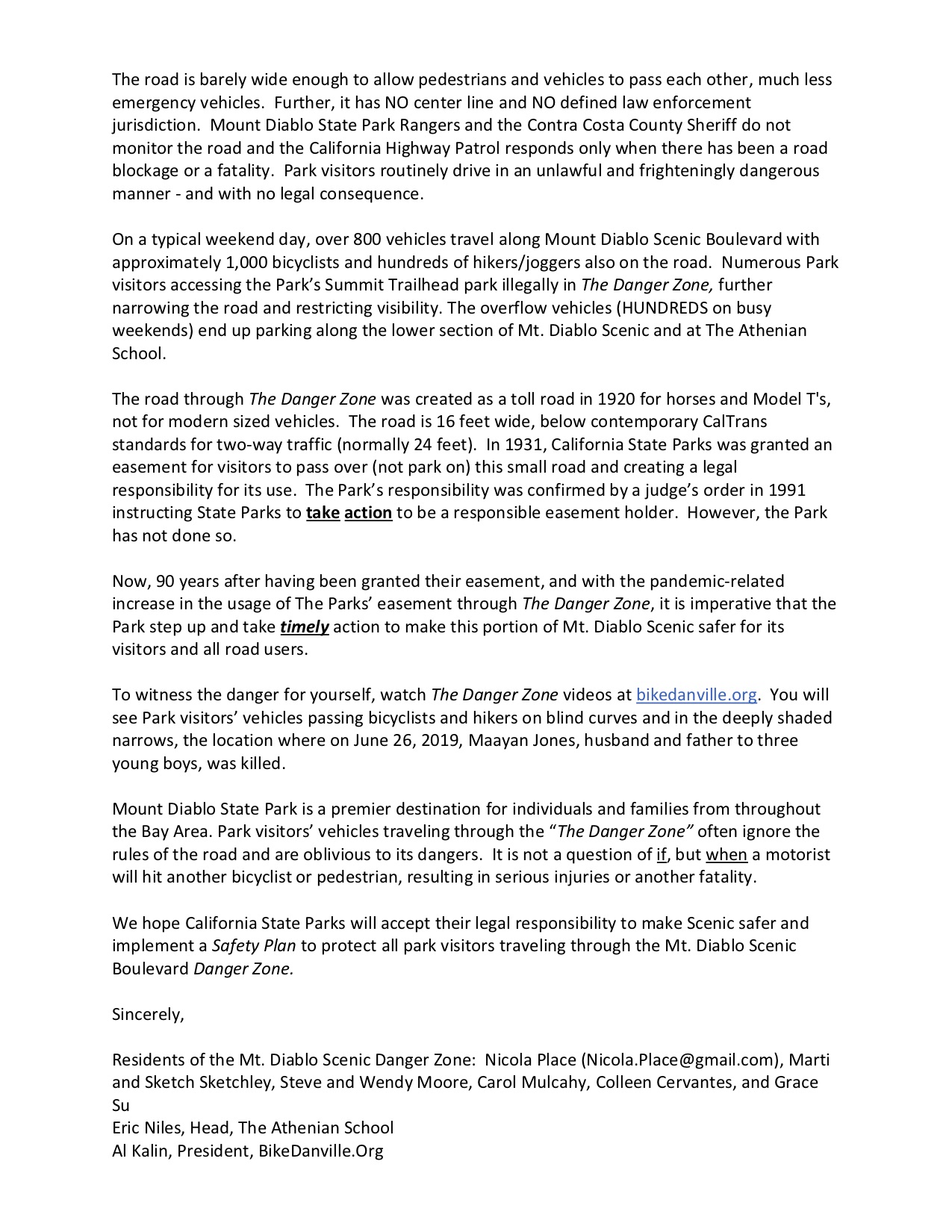 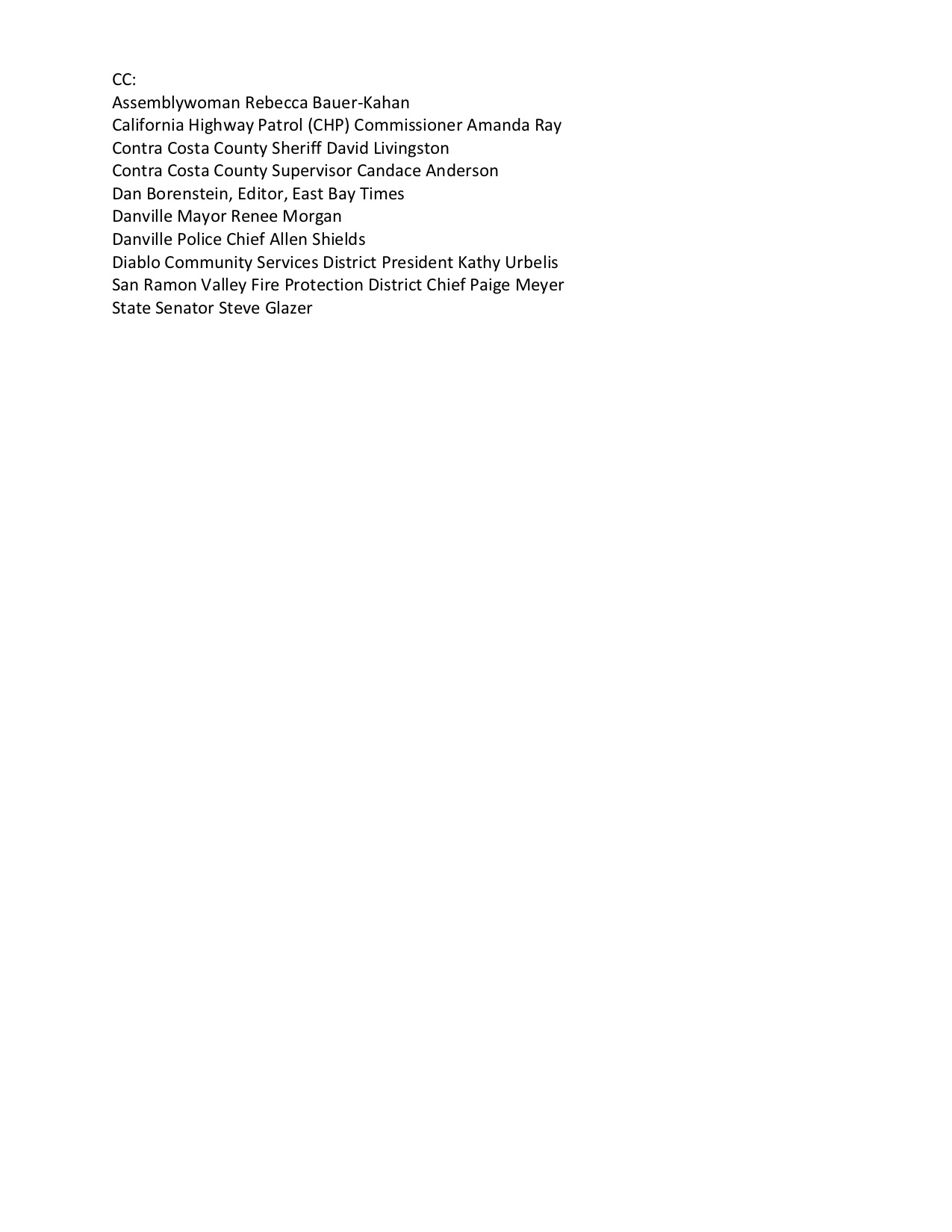 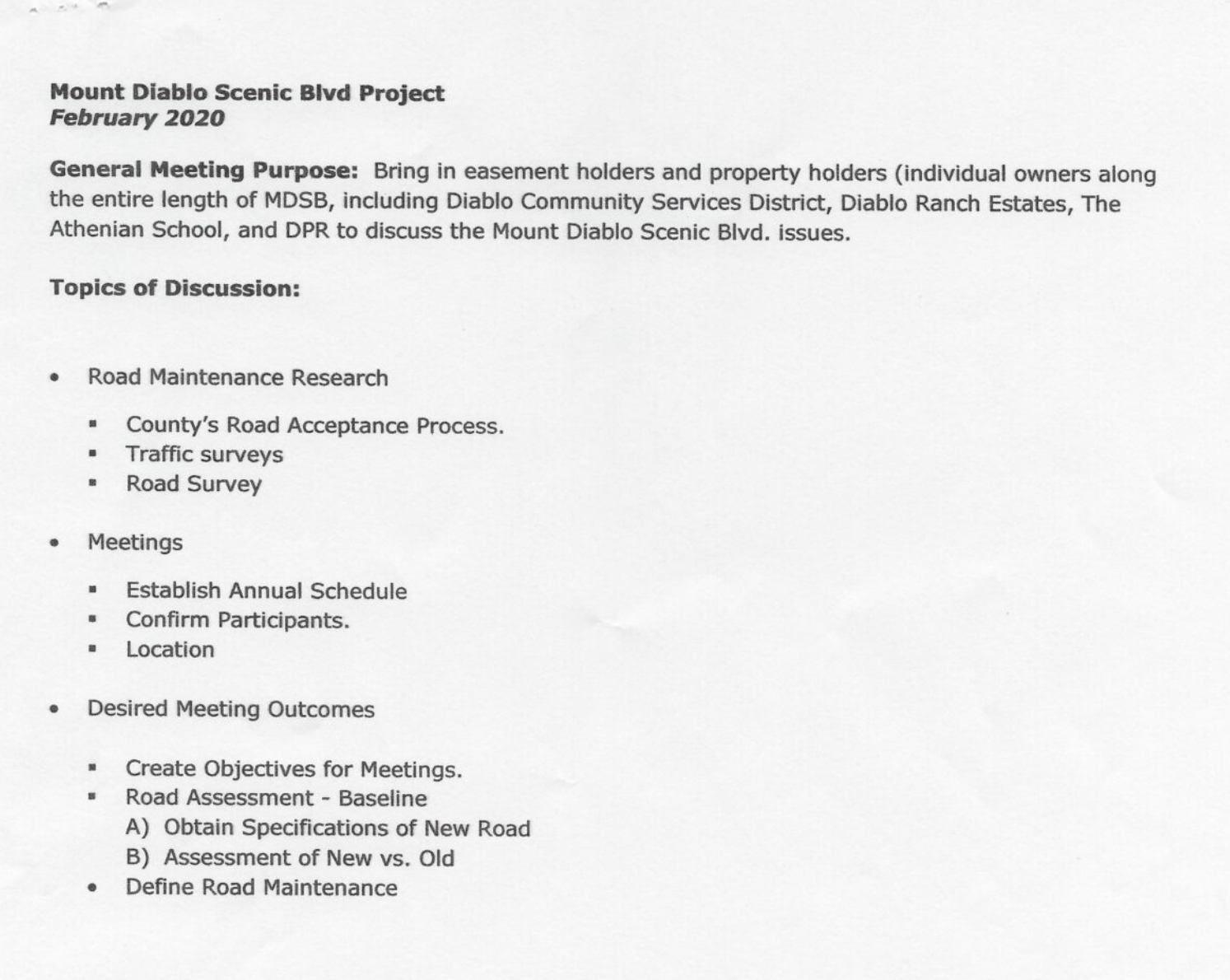 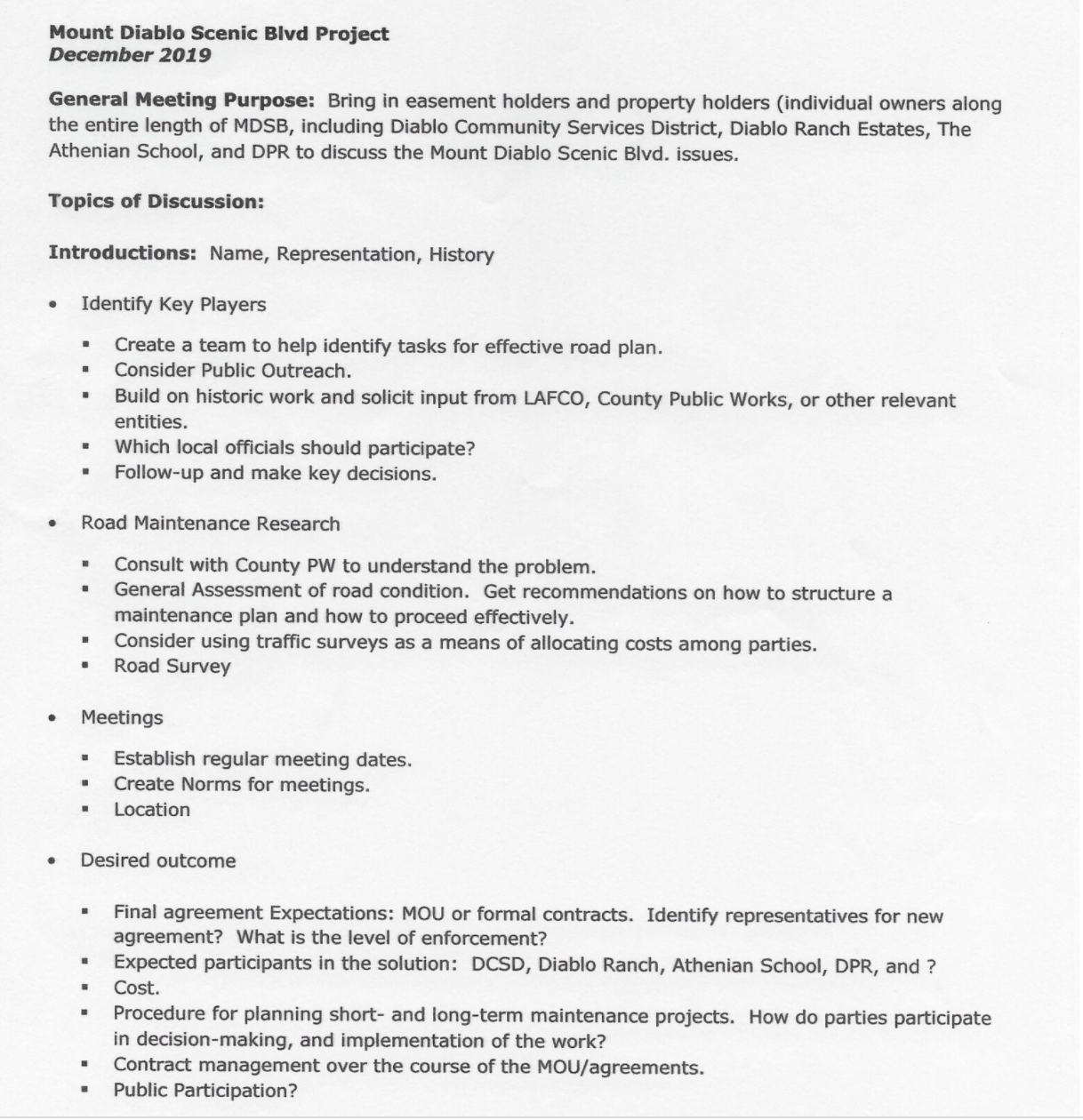