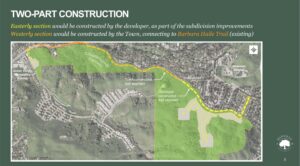 1.What is The Magee Preserve Project?

This is a proposal by Davidon Homes to develop approximately 29 acres (or 7%) of the 410-acre project site with 69 single family homes and seven attached secondary dwelling units (a.k.a. “casitas” or “in-law units”) As shown on the project site plan on the project page, the proposed lots are shown in blue while the remaining 381 acres (shown in white) would be converted to permanent open space.

2.Is it a development on an Open Space Preserve?

No.  The name of the proposed project selected by the developer is The Magee Preserve.  If approved, the project would set aside approximately 93% of the site as permanent open space.  However, at this time the property is privately owned by the Magee family and has development rights based on General Plan and zoning regulations established long before the Town’s incorporation.

3.Where is it located?

As shown on the site plan (on the project page), the property is located on the south side of Diablo Road and Blackhawk Road extending approximately two miles east from the intersection of Diablo Road/Green Valley Road/McCauley Road. Most of the proposed homes (66 units) would be situated behind existing development on the south side Blackhawk Road, set back from the road. The remaining three homes would be located off of McCauley Road, near the Diablo Road intersection.

4.What are the existing General Plan and Zoning designations for the Magee property?

The existing “Magee property” is comprised of 10 separate parcels with a range of General Plan and zoning designations; most of the property is covered by the either the Agricultural or Rural Residential Land Use Designations. Table 3-2 (page 3-11) of the Revised Draft Environmental Impact Report (Revised DEIR) provides a summary by parcel. It’s important to note that both the Danville General Plan and Town’s Zoning district for the Agricultural and Rural Residential Land Use Designations permit residential uses.  Specifically, this property’s zoning of A-2; General Agricultural District permits “a detached single-family dwelling on each parcel and the accessory structures and uses normally auxiliary to it” by right.  The zoning allows up to one home per five acres.

5.How does the General Plan or Zoning District allow 69 lots on Agricultural land?

As a first step in the Town’s development review process, a lot study is undertaken to determine a property’s maximum allowable development potential.  This study takes into account the property’s permitted density (example: up to one home per five acres) as well as the relevant development standards that apply (example: no development within 100 vertical feet of a ridgeline or on slopes in excess of 30-percent, etc.).  The conclusion of this study was that the Magee Ranch property had the right to request a maximum of 78 lots.  In 2010, SummerHill Homes submitted a development application for 85 homes.  Through the environmental review process, the proposal was reduced to 78 homes in 2011 and subsequently to 70 homes by late 2012.  In response to comments that surfaced through the Draft EIR prepared for the original project, the unit count was reduced further to 69 homes.

6.Why can’t the property be preserved in its current farmland state?

A city’s General Plan outlines the development rights of every parcel within its limits.  In this case, the property’s General Plan land use designations and its corresponding zoning districts allows up to 78 lots.  Denying a landowner the ability to request a development proposal consistent with the General Plan could constitute an unconstitutional taking of private property rights.

7.What is Measure S?

On November 7, 2000, the voters in Danville approved Measure S, which amended the Town’s General Plan.  It requires that any change to lands designated in the General Plan as (1) Agricultural, (2) General Open Space, or (3) Parks and Recreation would be subject to a vote of the people or a 4/5 vote of the Town Council. Properties designated as General Open Space or Parks and Recreation have no development potential, but properties designated as Agricultural do have some limited development potential.  Therefore, a property designated as Agricultural may be developed without triggering a Measure S vote – as long as the proposed development does not exceed the maximum density permitted by that land use designation.  Any development proposal that exceeds the maximum permitted density would require a General Plan Amendment and be subject to a Measure S vote.  As a final note, many of the comments have referred to the property as “Agricultural Open Space,” which has led to a misunderstanding that the property has no development potential.  “Agricultural” and “Open Space” are, in actuality, two separate General Plan land use designations.

8.Is the project subject to Measure S and therefore a public vote?

No.  The reason why is that the proposed project is requesting a change in the Zoning district; not a change to its General Plan land use designation.  The proposed rezoning does not add development potential.  Instead, it serves to transfer all development rights of the 410-acre site to just 29 acres and preserves the remaining 381 acres as permanent open space (Revised DEIR, page 1-1).

9.Why does the property need to be rezoned?

While the property owner could propose to subdivide the property with all homes spread across the entire 410 acres, it would be inconsistent with the Town’s General Plan.  The Danville General Plan contains several “Special Concern Areas,” which are properties that warrant additional and specific direction related to its potential development.  The Magee Ranch property is one of these Special Concern Areas and the General Plan’s direction for it states that:“[P]roposals which transfer the allowable number of homes to the least sensitive and obtrusive parts of the site are encouraged.” “[S]ubdivision of this Special Concern Area into five-acre ‘ranchette’ sites similar to those in the Tassajara Lane/Sherburne Hills area is strongly discouraged. Such development would require grading and road construction that could substantially diminish the visual qualities of the area. Transferring allowable densities to a limited number of areas within the ranch would enable the bulk of the site to be set aside as permanent open space.” The only way to meet these planning objectives is to rezone the property to allow for the transfer of potential development of the 410-acre site to just 29 acres, preserving the remaining 381 acres as permanent open space.

10.How much traffic would the project generate?

The traffic analysis studied the project’s potential impact using a methodology that allows the Town to distinguish between current traffic conditions from the project’s contribution to an existing traffic baseline.   Under law, a project is only required to mitigate its own impacts to the baseline rather than to fix all existing problems.  The analysis concluded that the project would increase the daily traffic volume along the Diablo Road corridor, west of Mt. Diablo Scenic, by 4-percent.  The project would also be required to contribute its fair share of future road improvements.  As a contribution toward improving the travel corridor, the project applicant has agreed to improve the intersection of Diablo/Green Valley/McCauley intersection by extending the westbound right-turn and through lanes.  This would increase the number of cars that can move through one traffic signal cycle and decrease the overall wait time, improving the operation of the intersection.

It is also worth noting that the methodology used in the traffic analysis has been upheld by the both the Contra Costa County Superior Court (2013) and the California Court of Appeal (2015).  {Internal Note: these will be linked to documents}

11.Were impacts to cyclists considered?

Yes, the traffic study performed an analysis of bicycle safety using a nationally recognized method established by the Highway Capacity Manual (HCM 2010).  The analysis concludes that a proposed development of 69 homes has a negligible impact on bicycle safety. It is also worth noting that the proposed project would enable the Town to implement a long-term vision to build a paved multi-purpose path across this property as alternative to Diablo Road.

12.Would the project cause downstream flooding and erosion?

13.Would the development impair the ability for police and fire to respond?

14.Has this project been proposed before?

Yes.  In 2010, SummerHill Homes submitted a development application for 85 homes.  Through the environmental review process, the proposal was reduced to 78 homes in 2011 and subsequently to 70 homes by late 2012.  In response to comments that surfaced through the Draft EIR prepared for the original project, the unit count was reduced further to 69 homes.   After holding four public hearings to consider the development proposal, the Town of Danville approved the 69-unit project in July 2013.

15.Was there a lawsuit filed against the original project?

Yes.  A lawsuit was filed in July 2013 to challenge the project approvals, alleging that the Final EIR inadequately addressed project impacts and that the project was inconsistent with the Town’s General Plan.

The Trial Court rejected the majority of these claims and the Court of Appeal rejected all allegations except the claim that the EIR did not adequately address potential impacts to bicycle safety.  Specifically, additional environmental analysis on bicycle safety is required before the Town considers approval of the proposed project.

16.What was the outcome of the lawsuit on the SummerHill development proposal?

The Superior Court rejected most of these claims and the Court of Appeal rejected all allegations except the claim that the EIR did not adequately address impacts to bicycle safety.

Specifically, additional environmental analysis on bicycle safety is required before the Town considers approval of the proposed project.  As a part of updating the EIR to address bicycle safety, the Town has also chosen to update other environmental studies (such as transportation, air quality, greenhouse gas emissions, etc.).

17.What will happen if Measure Y passes, or if it fails?

If Measure Y passes, the 69 lot project that was approved by the Town Council in July would be affirmed, and the applicant could go forward with project development. If Measure Y fails, the Town’s approval would be overturned. As a result, the property would stay as it is until a future development is proposed and approved. More information can be found here: https://www.danville.ca.gov/711/March-3-2020-Election

18.What public trails would be associated with the development?

The applicant would be required to dedicate public trail easements throughout the project site.  Some of these would be dedicated to the East Bay Regional Park District. A trail easement running parallel to Diablo Road would also be dedicated to the Town of Danville. More information on project trails can be found here:  https://www.danville.ca.gov/645/Diablo-Road-Trail-Feasibility-Study

19.Who will maintain the trails?

The trails would be maintained through a Geologic Hazards Abatement District (GHAD) that would be established as part of the project. As a result, the new homeowners would pay for the maintenance.

20.Will Diablo Road be improved?

The cost of widening Diablo Road has been studied and found to be cost prohibitive https://www.danville.ca.gov/645/Diablo-Road-Trail-Feasibility-Study. However, both the Diablo/Blackhawk/Mount Diablo Scenic and Diablo/Green Valley/McCauley Road intersections would be improved.

21.How will the open space be assured to be permanent?

The P-1; Planned Unit Development rezoning would transfer all development rights to 29 acres of the site, leaving the remaining 381 acres of the site with no development rights. In addition, scenic easements and protective easements covering the 381 acres would be dedicated to the Town. Finally, the East Bay Regional Parks District (EBRPD) has agreed to accept over 90 percent of the land in either fee title ownership or restrictive easements assuring no future development. See EBRPD letter https://www.danville.ca.gov/DocumentCenter/View/3941/12-05-19-Letter-from-EBRPD-to-Town-Manager-Joe-Calabrigo-PDF

22.Will the project have a negative impact on fire safety?

Fire safety was fully studied as part of the Environmental Impact Report (EIR) prepared for the project. In consultation with the San Ramon Valley Fire Protection District, the report found that the project would not have a significant impact on fire safety in the area. The project would also include three evacuation routes through the open space area to the south and west in addition to Blackhawk Road.  You can watch and listen to the information provided by the San Ramon Valley Fire Protection District’s Fire Marshall on this subject at: https://danville-ca.granicus.com/player/clip/1170?view_id=9. Discussion starts at the 50:00 minute mark and finishes at 56:30.

23.Are there State laws that require development of open space?